There was a man who had three sons. He gave each of them a duck and told them to go out and sell their duck for as much as possible.
The first son went out and sold his duck for $5, went home and told his dad what he had done. His father congratulated him and told him to go and buy himself beer
The second son also sold his duck for $5. His father congratulated him and told him to go and buy himself a beer
The third son went out and saw a gorgeous blonde woman on the side of the road. He went up to her and said I'll give you my duck if you have sex with me. She considered it and said 'Ok'.
They had sex and when they were done she said wow that was good, I'll give you your duck back if you'll do me again.
The boy agreed. While they were having sex again, the duck got loose and ran out into the road. They saw the duck escape and pulled their pantson but not quickly enough to prevent the duck from getting run over by a car..
The driver jumped out of the car and said 'I'm so sorry I killed your duck. I'll give you $40 dollars to make up for it.
When the third son finally returned home, his dad asked how much he had made.
He said 'I got a fuck for a duck, a duck for a fuck, and forty bucks for a fucked up duck.'
Quack .. Quack.. 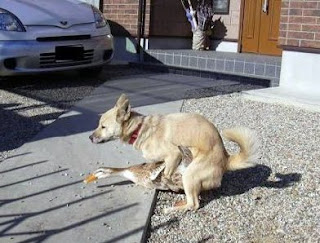