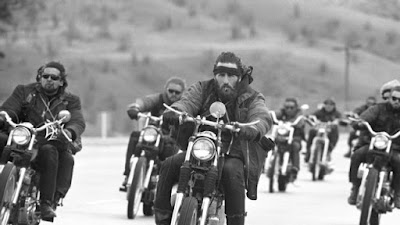 Back on January 9th, a group of Pekin, Illinois bikers were riding west on Interstate 74 when they saw a girl about to jump off the Murray Baker Bridge . So they stopped.

George, their leader, a big burly man of 53, gets off his Harley, walks through a group of gawkers, past the State Trooper who was trying to talk her down off the railing, and says,
"Hey Baby.....whatcha doin' up there on that railin'?"

"Well, before you jump, Honey-Babe... why don't you give ole George here your best last kiss?"

So, with no hesitation at all, she leaned back over the railing and did just that... and it was a long, deep, lingering kiss followed immediately by another even better one.

After they breathlessly finished, George gets a big thumbs-up approval from his biker-buddies, the onlookers, and even the State Trooper, and then says,
"Wow! That was the best kiss I have ever had, Honey! That's a real talent you're wasting, Sugar Shorts. You could be famous if you rode with me. Why in the world are you committing suicide?"

It's still unclear whether (she/he? )jumped or was pushed
Posted by Bearer at 5:43 PM No comments: 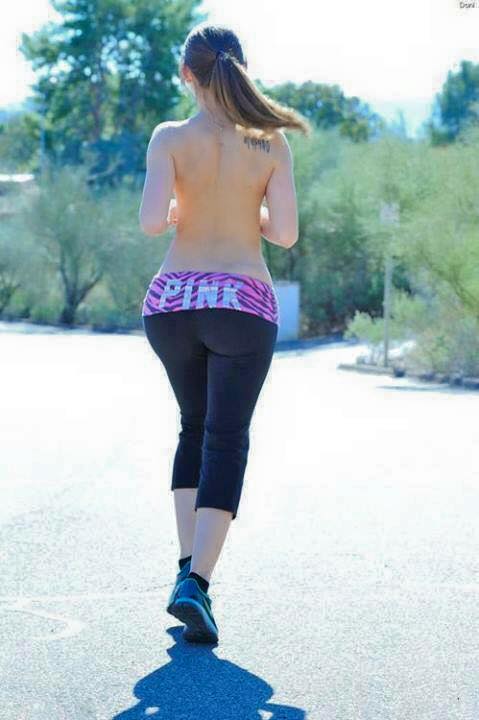 A guy calls a company and orders their 5-day, 5lbs weight loss program.
The next day, there's a knock on the door and there stands before him a voluptuous, athletic, 19 year old babe dressed in nothing but a pair of Nike running shoes and a sign around her neck..
She introduces herself as a representative of the weight loss company. The sign reads, "If you can catch me, you can have me."
Without a second thought, he takes off after her. A few miles later puffing and puffing, he finally gives up. The same girl shows up for the next four days and the same thing happens. On the fifth day, he weighs himself and is delighted to find he has lost 5lbs as promised.
He calls the company and orders their 5-day/10lbs program. The next day there's a knock at the door and there stands the most stunning, beautiful, sexy woman he has ever seen in his life. She is wearing nothing but Reebok running shoes and a sign around her neck that reads, "If you catch me you can have me".
Well, he's out the door after her like a shot. This girl is in excellent shape and he does his best, but no such luck. So for the next four days, the same routine happens with him gradually getting in better and better shape.
Much to his delight on the fifth day when he weighs himself, he discovers that he has lost another 10lbs as promised. He decides to go for broke and calls the company to order the 7-day/25 lbs program.
"Are you sure?" asks the representative on the phone. "This is our most rigorous program." "Absolutely," he replies, "I haven't felt this good in years."
The next day there's a knock at the door; and when he opens it he finds a huge muscular guy standing there wearing nothing but pink running shoes and a sign around his neck that reads, "If I catch you, you are mine."
He lost 33 lbs that week..
Posted by Bearer at 11:07 PM No comments: